36 DAYS A Political Chronicle of Ambition, Deception, Trust and Betrayal 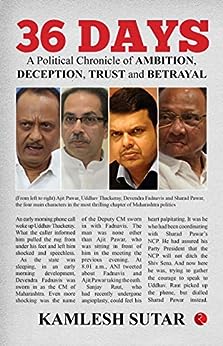 A fly-on-the-wall account of the most thrilling 36 days in the history of Maharashtra politics.
The battle of Kurukshetra described in the Mahabharata lasted for 18 days.
In the aftermath of the 2019 Maharashtra assembly elections, another battle was fought—though
not on any battlefield. It went on for 36 days.
Neither of these battles was a spontaneous attack. Rather, the seeds of both were sown over the
years, and a broken promise tipped the scales in both cases.
The similarities don’t end there. As you encounter the dramatis personae of the 36-day political
drama—or should we say pieces of the game of chess—you may find yourself drawing parallels
between them and the cast and characters of the great Indian epic.
Embedded with tales of ambition, deception, trust and betrayal, 36 Days reads like a quintessential
thriller. Only, it is for real…

Be the first to review “36 DAYS A Political Chronicle of Ambition, Deception, Trust and Betrayal” Cancel reply